Musical collaborations via the Web.

In 2008 I discovered Indabamusic.com* which connected me with a growing on-line community of musicians, producers and re-mix DJs.  for about four years I had a lot of fun collaborating via the website on recording sessions and working to high standards gave quite a boost to my skills and confidence.  With friendly support from more experienced indaba members I learned the basics of home studio recording, production, mixing, mastering and got pretty good at it… or so I believed.

Learning by trial and error can be a lot of fun,  wild enthusiasm can drive you along and feels good as long as technical matters are simple, but there is no substitute for really knowing what you are doing.  My rather chaotic way of working must have been difficult for my loved ones to live with, working late into the night,  occasionally Jumping up, wide awake at 4am, and into the studio to try out a new idea.

I created a series of sessions to develop my own compositions, contributed bass and piano parts to other people’s sessions, and later felt drawn to trying the role of producer. I reasoned that consciously serving the needs of others might help to moderate the rather unappealing tendency of wanting to control everything.

When presented with a freestyle demo track (no metronome) I dutifully created a tempo map, adjusting the BPM setting bar-by-bar to make my DAW follow the emotional ebb and flow of the song.  I also developed the skill of writing instrumental parts to the piano-roll editor and painstakingly adjusting note-on and velocity values to achieve a  contrived performance with a natural human feel.  This work requires hyper-focus, a labour of love I thought, but I was not being very kind to myself.  Hours of intense concentration, forgetting to take proper breaks, not always noticing when fine judgement gets impaired by tiredness.  This compelling activity became addictive, eventually leading to ‘screen aversion’.  After a while I just didn’t want to make music with a computer any more, just thinking about it was painful.  I turned my attention towards live performance, improvisation sessions and providing PA and mixing services.

Well now we have the need for self isolation and working from home looks like a very sensible thing to do.  I recall how enjoyable it was building friendships within the Indabamusic  community.  When musician friends are suffering loss of income and frustration with no prospect of a gig, I am urging others to give on-line collaboration a try.

On-line training providers are certainly not slow to realise the need of the time.  By returning to study I intend to learn more efficient working habits, how to work faster, and gain better awareness so I can stop fine tuning the settings when my mix has reached the ‘good enough’ stage.

Does remote collaboration work for you?

How do you avoid screen aversion?

The more enlightened our houses are,  the more their walls ooze ghosts.

The true meaning of this quote remains just beyond the reach of my comprehension, however it somehow stirs a desire to write.

I have never seen a ghost in a house, but in a place I like to walk is the ghost of a crofters cottage, a relic of bygone times, the roofless granite shell endures although bushes grow as freely within the rooms as in the garden.

The care with which these stones were placed draws me to linger there and ponder upon this lesson in balance and stability.  The walls are built of rough-cut granite blocks, I note how the irregularities of each one are gracefully hidden by facing them inwards to each other so the hollow of one accommodates the jutting point of another, presenting to the world the ‘best’ face, a reassuringly orderly assembly of  randomly formed rocks.  Granite is especially difficult to work so for this kind of farm dwelling only certain feature stones have been shaped into orderly rectilinear shapes, the chimeny stack, the door and window lintels and door step. 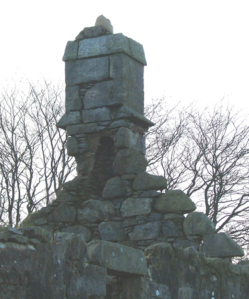 The skill of the builder is to choose a rock that fits well with it’s neighbours, turning the best face outward, each finds a significant place within the wall. By now most of the lime mortar has been eroded away yet the integrity of the structure remains, enduring the frosts and buffeting winds, still showing a well composed face to the world.  The innate strength of a house relies upon a strict adherence to geometric form, yet here is one made up of randomly shaped pieces. The builder would have had no choice but to use whatever material was to hand and make the best of it. 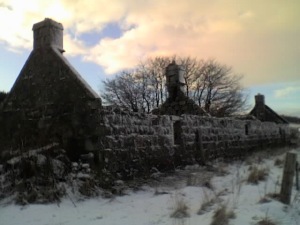 Music on the Brain

Dear Reader, does this ring a bell with you?

There is music in my mind constantly, sometimes the last tune I was listening to, an old favourite, sometimes a catchy Pop tune lodges there and will not remove even one I do not like!  Mostly a stream-of-consciousness style on-going spontaneous composition. this continues day and night I believe, which is perhaps unusual, how do I know the mind is busy with tunes through the sleeping hours?

My Dentist asked me about it, She said “your teeth are unusually worn down at the surface, what on earth do you eat that would cause such wear and tear? I thought for a moment then the realisation came. I become conscious at times that I tap out rhythms with my teeth keeping time with my inner musical activity, a combination of tapping and sliding movements satisfyingly audible through the skull, my jaw must be working away right through the night. While working at the carpenters bench especially I notice myself doing this and often while walking through the busy town, the whole body is involved, footsteps, sawing and hammering all fall into the rhythm or syncopate with it.

Well… so what?  so I am a musician through and through, yet the habit concerns me, I notice the level of inner music activity increases with anxiety levels, which suggests it may be a displacement activity that is comforting and displaces worrisome thoughts.

I am clearly not alone in this:  http://www.wrongplanet.net/postt121329.html

What about during speech? surely you might think the incessant musical activity must be put on hold while speaking, probably true yet you will be aware that speech has its own cadences, it’s own hidden melodies.

Have you heard The Sursiks?

their CD titled, I DIDN’T KNOW I WAS SINGING is a celebration of the inherent melody of speech. Every track begins with a loop of human speech taken from recorded voicemail messages, it’s a clever concept. The musicians listen carefully to the speaking voice, viewing the waveform on a computer screen, the melodic pitches are identified, the rhythms the phrasing, all is notated, learned and improvised around with guitar, percussion, organ, trumpet etc the accompaniments are skillfully arranged to make a convincing song structure. Backing singers echo a phrase here and there adding emphasis, the result is most entertaining, at times hilarious and thought provoking.

Wicked – ain’t what it used to be

Posted on April 5, 2013 by bonnybluehare

Wicked,  used to be an adjective you’d want to avoid being labelled with, however it is a word that always had a kind of double meaning, to have a wicked sense of humour is seen as a loveable, even enviable aspect of personality.  Now I rarely hear this word used as a term of disdain, if people say something you did was wicked, it means you won the approval of your peers. 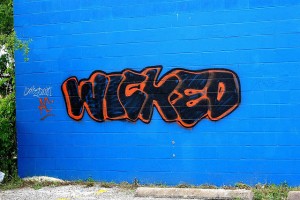 I met a man at a party once, I enquired after his profession as is the custom at certain types of party.  He worked for the OED (Oxford English Dictionary) scouring the publications of the day for new words.  If an original word or phrase is known to be in common usage that is not enough to qualify for inclusion in the OED, someone has to find at least two (I think) instances of this word or phrase printed in a published book, newspaper,  newsletter or periodical to have it accepted as a legitimate subject of discussion among the lexicological community.

What an interesting job I thought.

New ideas need new words to express them succinctly, as do new forms of technology, activity, or forms found in Nature.  Some might argue

“there is nothing new under the sun”

but humans live in a temporal world, characterised by CHANGE, so the minting of new coins in the currency of speech is evidence to me that we need them to uphold a sense of freshness, newness to help draw our attention to new things as they arise.  There is a kind of thrill about finding something new.

An Elegant Gesture of Defiance

On the dining table my father spread out the hand written manuscript for the family to see.  It was skillfully penned in cursive script and embellished with coloured inks, the choice of paper though seemed unconventional for caligraphy of this quality.   Observing his duties as a civil servant Dad had found this unusual document among the completed census forms he had collected and was preparing for collation.

So what was the motive for covering the pages of a census form with calligraphy?  Two or three pages of rhyming verse made an eloquent statement of protest, expressing annoyance towards bureauocratic systems in general and the decennial census ritual in particular.  It was well expressed with satirical humour I recall.

I do wish we had taken a photograph, but of course being in possession of such an image would constitute a breach of confidentiality.  To my knowledge Father was inclined to observing the duties of his profession consciensiously.  His action in this case might be regarded as a minor infringement of official protocol,  however I thank him for choosing to show it to his wife and children, enriching my memories of the man.

The UK Statistics Authority have no powers to punish errant citizens beyond the grave, despite their obsessive hoarding of personal details.   The collecting authorities would no doubt have described such a document as a spoiled form, a term bristling with irony to further reinforce the artist’s heart-felt message.

Whoever had the interesting task of extracting data from this document may remember it still.  Would the papers have been shredded to a resounding chorus of “tut tut tut” ?  I fear they might, however if it were my duty to organise the archives I would have a special secure cupboard reserved for spoiled forms of this nature.  Imagine a public exhibition of creatively spoiled census forms,  I wouldn’t object to queueing up for that one.

Post script:
I asked my Sister if she remembered the document, the incident or anything about it.   Her reply is interesting, she remembers a census form, correctly filled in with the required personal details in hand written copper-plate cursive script, probably she thought penned by an elderly person who would have been taught at school to write that way.

I still trust my memory of the incident, although in the telling of a good story a little embelishment is inevitable.

Here is a poem I wrote fin a card wishing my riend’s a speedy recovery.  Bob was hospitalised with concussion after he came off his bicycle on a tight corner. The final two lines are relevant to this blog post.

How soft the software engineer

how hard the black Tarmac

and loose the grit at the corner

that threw poor Bob on his back

That long freewheel down Parbold hill

the skid near Bramble way

if only we could cut and paste

The programming would be tricky

but probably worth the sweat

would be popular you can bet

The hardest part of the project

would be reliable memory

ask any three witnesses what they saw

and they never will agree